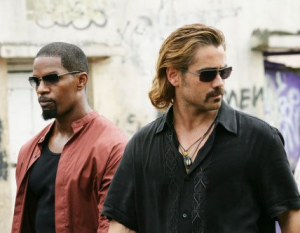 Colin Farrell and Jamie Foxx frequented TNT Marine Center quite often when filming Miami Vice, the movie. TNT rigged boats for filming and also rigged the camera boats. Johnny had an extra role as stunt double for Colin during the boat chases. Who better to put behind the wheel doing only 130 mph and treats it just like any other day… Michael Mann chose TNT as their base during the months of shooting and got to be quite a regular. The whole TNT team played a big role in the Miami Vice come back. Surely… TNT rigged some of the boats in the TV show or even the drug runners boats… You never know?