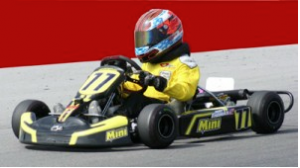 Matthew Thomas epitomizes the sentiment of a motor racer. He eats, sleeps and breathes racing! Competing in his first local series in September 2008, he quickly learned that he loved the sport of karting. Entering the 2009 Florida Winter Tour as a relative novice, he ended the series ranked in the top-10. At his home track in Homestead, Matt continued to hone his driving skills finishing second in the South Florida program and is currently ranked first in the Fall Championship Series. At the Rotax Summer Shoot Out, Matt ran top four all weekend long and was ranked fourth overall in Micro Max. During the USA Grand Nationals, Matt raced consistently all week long, finishing in the top-10 to complete his first year racing in the Micro Max class. For 2010, Matt is extremely excited at the prospects of running with Kart Mini and RDD Motorsports.