Which Is Best: V-Hull Or Catamaran? Johnny Tomlinson Weighs In On The Ultimate Boaters’ Debate 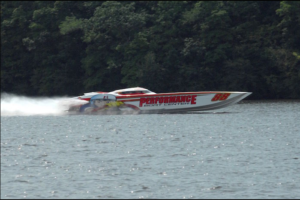 V-Hull or Catamaran? We suppose it all comes down to personal preference, but according to our very own Johnny Tomlinson, Cats hold an edge for boaters looking for speed. In the article below, originally published on LakeExpo.com, Tomlinson joins other boaters to answer the age old question: should you get a V-Hull or Cat?

The great thing about the Shootout is all the variety: from pontoons to catamarans, PWCs to V-Hulls, everybody comes with a “run what you brung” attitude and they leave it all on the water. But when it comes to the debate about the best and the fastest, two types divide powerboaters: catamarans and V-Hulls.

Some people just can’t help themselves: they’re Cat lovers. And for good cause: Cats have risen to the top, in the world of high performance boat racing. As a matter of fact, the 2015 LOTO Shootout Top Gun American Ethanol was a 51’ Mystic Cat driven by Myrick Coil and John Cosker.

Another Cat, perhaps the fastest Cat in the world, holds the all-time top LOTO Shootout speed record. In 2014, the 50-foot Mystic Powerboats catamaran Al Adaa’am 96 driven by owner/driver Sheikh Hassan bin Jabor Al-Thani of Qatar and British throttleman Steve Curtis set down a jaw-dropping 244 mph run that awed fans up and down the Shootout race course.

And—sorry V-Hull fans, we’ll get to you—the LOTO Shootout top speed record before the Sheikh’s was held by a Cat. Bill Tomlinson and Ken Kehoe set the former record of 224 mph in “My Way,” a 50 ft. Mystic Powerboats Cat in 2013. The top three fastest LOTO Shootout boats have all been Cats. Other fast and famous Cats include Recycler 3, Performance Boat Center, Bacardi Silver, Bud Light, Gone Again, 2nd Amendment, and Budweiser.

But is a Cat better than a V-Hull? It depends on who you are talking to and what they want out of a boat.

Cat lovers have a saying, “If it isn’t a Cat… then it’s a dog.” Cats are built with serious go-fast hardware and can go 40 to 50 mph faster with the same set up as a V-Hull. They are also said to be more stable at high speeds. Cat lovers contend the boat is built lighter, with two parallel hulls of equal size and a wide stabilizing beam. That makes for less hydrodynamic resistance than a V-Hull, meaning less propulsion power is required.

Cat lovers prefer their dual-hulls because the tunnel in between them packs air, which reduces the boat’s weight in the water. Lighter = faster. As a Cat picks up speed, it becomes more efficient because the boat is essentially lifted out of the water and rides on a pillow of air, making it less hydrodynamic and more aerodynamic. The boat is still riding on water, but very little water. Is that safe? “Any time you go fast, safety is questionable, but you have a lot of control in a Cat and you can always slow down,” World Champion Power Boat Racer Myrick Coil said. “I feel like I have a lot of control in a Cat because I am dealing with aerodynamics and not hydrodynamics.”

“If you want to go really fast, a Cat is better,” racer John Tomlinson once said. But a V-Hull that does 145 mph is not exactly slow: Dennis Parvey hit that in his 43’ GT Black Thunder V-Hull, taking the Top Gun Non-Professional V category in the 2015 Shootout. Parvey has never seen how fast his Black Thunder can go. His reason: “Going 150 mph in a V-Hull is not very relaxing.”

Comparing the two boat types, Parvey said, “There is more room under the deck, a V-Hull is easier to insure, and they are easier to trailer.” He can also shower and sleep four comfortably on his boat. But, he added, “For everything else, a Cat is better.”