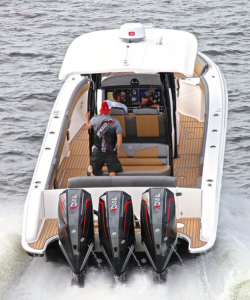 A few months ago, at the Lake of the Ozarks Shootout, Speed on the Water got the opportunity to see some of the latest and best performance center consoles! Read below to find out more about these new, incredible center consoles that are equipped with Mercury Racing 450R Engines and are sure to win the hearts of many. TNT Custom Marine is proud to be a preferred Platinum Mercury Racing dealer, providing the very finest service and rigging in the industry.

It’s hard to believe it’s already been more than three weeks since the Speedonthewater.com team evaluated a handful of the latest and greatest performance center consoles on Missouri’s Lake of the Ozarks during Super Cat Fest and the Lake of the Ozarks Shootout.

With three new Mercury Racing 450R engines on the transom, the new 2020 Fountain Powerboats 39NX available at Big Thunder Marine was quite a showpiece.

We’re still sorting through all of the aerial photography and the notes from our jam-packed day on the water with test drivers Grant Bruggemann, Bob Teague and Shaun Torrente as well as our resident interior inspector, Justin Wagner of Waves and Wheels, and Kellie Bruggemann, who provided the all-important female perspective, in preparation for the feature highlighting the different boats in the September/October Speed On The Water digital magazine. That being said, we wanted to share these red-hot images of the first Fountain Powerboats model with Mercury Racing’s new 450R engines—a gorgeous 39NX that was finished just in time to make it from the Washington, N.C., factory to the lake and the dealership where it is currently for sale, Big Thunder Marine.

We won’t give away all of the details here, but the 39-foot fully loaded Fountain was a pleasure to drive. With Torrente at the helm—and his lovely wife Flavia along for the ride—the 2020 model displayed impressive acceleration with the triple 450-hp engines and topped out at 81 mph. According to Jeff Harris, chief operating officer of Iconic Marine Group, the boat reached 84 mph on the Pamlico River during initial testing in North Carolina.

The 39NX, complete with a console containing a head, sink, storage, and a large V-berth, included a dive door with a telescoping ladder, an upgraded JL Audio stereo system, MarineMat flooring, an inviting front lounge area with a table and dual 16-inch Simrad displays with autopilot.