Tips for Repowering a Boat 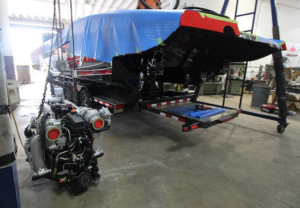 Have you ever wanted to repower an old boat that is collecting dust in your garage? Below are a few tips you can use to make your outdated boat one of the best in the water! At TNT Custom Marine we care about your boat and want to help in any way possible. If you are planning on repowering your boat, our rebuild and repower experts are the best in the industry and willing to help. To schedule an appointment to repower your boat contact us at 305-944-2118 or tntrace1@aol.com.

Today’s four-stroke outboards are more reliable than ever before with fly-by-wire controls and onboard sensors that maximize performance and efficiency. But, as my Roman forebears used to say, caveat emptor: The four-stroke solution is not the singular magical fix ideal for repowering all boats. What boats are we talking about? What are the challenges? What should you do before repowering? Here’s the scoop.

The first generation of four-strokes all had one thing in common: They were heavy. When you added all of those extra four-stroke parts, like an oil sump, valve train, etc., the engines definitely increased both their mass and weight. For example, the Yamaha F200 and F225 four-strokes weighed more than 600 pounds. A 200 horsepower two-stroke engine of that era might have weighed 425 pounds. Expect today’s best 200-hp outboard motors to have some weight, especially 4-stroke models.

After 2014, just about any maker’s 200-hp outboard V6 engine costs upward of $20,000 installed, depending on your gauge package, controls, installation, etc. Although it doesn’t burn pricey two-stroke outboard oil, it does require additional maintenance, like oil changes every 100 hours of use and valve adjustments at every 300 to 400 hours, expenses that don’t impact two-stroke owners. Plus, four-strokes that deadhead half of their cylinders with every turn of the crankshaft need more cylinder mass to compete with the prop-shaft sea horses generated by two-stroke power plants that are firing all of their cylinders with every rotation of the crank.

If you are repowering a newer boat, going with a four-stroke repower is probably nothing to worry about. But when considering a new outboard for a pre-2002 vessel, there is a concern regarding which solution will work best, since these boats likely weren’t designed with the requisite buoyancy aft that is needed to keep cockpit scuppers above the waterline with added weight on the transom.

If you have to stick with a two-stroke due to either weight or mass, Evinrude E-TEC and Mercury OptiMax two-stroke direct-injection V-6s should do the job. Sure, you’ll have to buy some two-stroke oil in bulk, which adds to the cost-per-mile of boat operation, but you’ll never have to do an oil change, swap an oil filter or adjust valves, all of which add to annual operating costs.

Also, four-strokes are losing weight, which should help when repowering an older legacy boat. Yamaha has an in-line 2.8-liter F200 that tips the scales at a svelte 487 pounds, which is actually lighter than a two-stroke 3.0-liter V-6 OptiMax. Not to be outdone by the competition, Merc has its own four-stroke 150 hp — an in-line-4 with a 3.0-liter block that has room to grow. It tips the scale at 465 pounds. The valves on this Merc 150 never need adjustment, which will lower operating costs. An outboard motor weight comparison is a must-do when considering engines to repower your boat.

If you need to focus on outboards in the 225 hp to 300 hp range, there are plenty of outboard motor repower options. Yamaha’s Offshore series (225, 250, 300 hp) provides the power and torque of a 4.2-liter V-6 block but lowers the overall weight of these triplets to an incredible 562 pounds. This mechanical miracle was accomplished by taking out the six-pack of steel-cylinder liners, which opened up the bore volume, which was then plasma-infused to provide a super slick surface to reduce piston-ring friction.

Hopefully, some of the lessons I’ve shared about repowering older boats will help you when it’s time to repower yours. To see a chart of horsepower and transom weights of outboard repowering options, visit boatingmag.com/repower-options.

Should You Repower with a Single Outboard Engine Instead of Two Smaller Outboards? 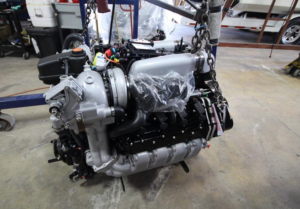 Have big, super-powerful new outboards changed the repower game by allowing multiengine boats to be propelled by just one engine? It’s a theory that’s thrown around here, our Editor-in-Chief opines on the viability of that theory.

Outboards like the 557 hp Seven Marine 557 and the 350 hp Mercury Verado and Yamaha F350 can provide another repowering option for older boats, those designed and built before about 2002. This is particularly true if the boat in question was originally powered by multiple outboard engines.

For example, if your boat is rated for two outboards and 400 hp, you might consider installing a single 350 hp outboard. Doing so would net you somewhat less horsepower than the original twin installation. But with only one gear case creating drag in the water, compared to two gear cases creating drag, comparable speed and performance would likely be attained. Additionally, the price and complexity of the installation for one big single engine can cost less than those for multiple engines, since fewer gauges, wiring harnesses, and propellers are required, and controls and steering equipment are simpler. Consider the cost to install one outboard motor or two engines.

So why doesn’t everyone do this? There are several reasons, and the first is that these monstrously powered outboards deliver enormous amounts of torque, possibly more than your older boat’s transom can handle. Furthermore, unlike with multiple engine installations, all the power and torque transmitted to the boat are concentrated at one spot on the transom instead of spread across multiple locations on the transom.

Also, consider the cost Safety concerns are another reason why swapping out two or more lower-powered outboards for a big single engine isn’t common. As trustworthy as outboard motors have become — they may now rank as the most reliable propulsion type in the history of marine transport — boaters who cruise far from shore still rely on the redundant safety of multiple engines: Should one breakdown, the other(s) can get you home.

Then there is dockside maneuverability. While outboards do not respond like inboards — due in part to torque, propeller size and a pivot point farther aft — a multi-engine boat handles close quarters better than a single-engine boat. Multiple engines also allow boaters to avail themselves of the convenience of the joystick control systems now available for outboards. Swapping multiple engines for one big engine is a great idea. But not every boat is up to the task.