How to Dock a Single-Engine Inboard Boat 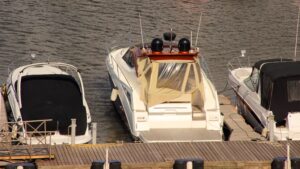 When docking an inboard—direct-drive or V-drive—boat, take your time, be patient, have fenders and dock lines ready beforehand, and know your surroundings and the water conditions. To find out more on how to dock a single-engine inboard boat, check out the article below.

However, inboards possess -inherent differences from their sterndrive or outboard counterparts. When in reverse, there is less intuitive control of the boat—and oftentimes a strong pull to starboard, even with the wheel turned to port. Such is the case when you spin your propeller the opposite direction and pull water through the rudder rather than push it. For -newcomers to today’s big wakeboarding and wakesurfing V-drives, this can be awkward, intimidating and frustrating, but it doesn’t have to be. Here are some general tips to help you dock a V-drive—or any inboard-powered boat—like a true pro.

Slower Can Be Better

It is better to go in and out of gear multiple times while taking your time than to slam in and out of gear a couple of times, then crunch the dock. Use neutral to your advantage by allowing your boat to pivot. A little bit of throttle and then moving to neutral allows the boat to swing without moving forward or backward much at all.

If Possible, Dock to Starboard

Because most single inboards naturally pull to starboard when in reverse, it is easiest to dock to that side. This also allows the skipper to grab the dock if necessary. With the throttle just in gear, approach the dock at an angle—about 30 to 40 degrees. Gently ease the bow to within a couple of feet of the dock, come out of gear to slow momentum, then with the wheel turned to starboard, use a bit of reverse to swing the transom into the dock. If the stern is swinging in too fast, a slight bump of the throttle forward, with the wheel turned starboard and then back to center, will -correct it.

If you can’t make a U-turn and dock to starboard, docking to port can still be accomplished, just with a little more effort. You will need to use forward momentum rather than reverse to swing the stern of the boat in, so make sure you have ample room. Slowly approach the dock at the same angle, and as you get closer, turn the wheel to port to allow the transom to swing in. Mitigate the momentum with some reverse—with the wheel to starboard, so you’re not fully backing out of the spot you’re -trying to get into.

Several of today’s V-drive boats can be equipped with factory-optioned stern thrusters, most notably from Malibu and Nautique, while companies like EZ Drive Thruster provide aftermarket alternatives for nearly any make and model. These allow for the biggest of wakeboats to be much more nimble and maneuverable, even in tight docking spaces.

The responsiveness of your boat will depend a lot on your load. How much crew and ballast do you have on board? A loaded boat will not maneuver as easily, so keep that in mind when docking.