Best Boating Gadgets: 6 Of The Best Options For Upgrading Your Boat’s Tech 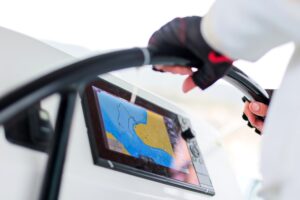 New enhancements to your boat can improve boat performance and objectives like finding certain points on the water and creating the best social scene with high tech speakers and lights. Check out the article below to learn about the 6 best options for upgrading your boat’s tech!

Long gone are the days of relying on lead lines and dead reckoning, today’s boats are bristling with technology, but if you want to upgrade, we’ve rounded up some of the best boating gadgets on the market today.

Whether you want to add underwater cameras, smart navigation systems, or simply keep all of your devices charged up, there has never been such a dizzying array of boating gadgets.

As part of our 2021 Editor’s Choice, we trawled through the myriad of boating gadgets on the market to pick out what we think are the best of the best.

Read on, but be warned – you may be tempted into spending even more money on your boat…

We’ve not been out and measured all its competitors ourselves, but we have no reason to doubt Iris when they tell us their IRIS735 micro-compact camera is the world’s smallest through-hull/bulkhead unit of its type.

Measuring 28 x 36mm and projecting just 8.5mm from the panel to which it is mounted, the IP67 waterproof rated IRIS735 is equipped with a 2.9mm wide angle lens and a Sony Starlight sensor for low light operation.

In our opinion it’s a tiddler that punches well above its weight as it enables you to keep an eye on hidden areas of your boat via a choice of four video formats: TVI, CVI, AHD or CVBS.

Billed as the world’s first marine hand portable VHF radio with a built-in AIS receiver, the Icom IC-M94DE was always going to catch our eye.

But the range of features incorporated into this new generation – although instantly recognisable as a member of the Icom handheld family – doesn’t stop there; for the IC-M94DE’s veritable spaghetti alphabet of safety attributes continues with DSC and GPS.

The unit excels in many other ways too: It’s powerful, pumping out 6W of radio frequency output, and the 1500 mW of audio output should provide ample volume at all but the noisiest of helms.

Many of us have dreamed of a mobile phone charger for boats that’s compatible with both Apple and Samsung products and many other brands too.

And now there is one. In fact, in a consumer sector seemingly unable to agree on a universal charging port, we think the Scanstrut ROKK Wireless Active provides a refreshing breath of fresh air.

Better still, designed from the ground up for marine use, the unit has an IPX6 waterproof rating, works off 12 or 24V and can even charge mobiles inside non-metallic waterproof phone cases, thereby making it an ideal boat bolt-on.

No boat party would be complete without a decent onboard entertainment system, and for anyone wanting to go beyond sound alone and dazzle their guests with a full son et lumière experience, Clarion’s new CMSP speakers are well worth a listen and a look.

That’s because in addition to pumping out crisp, clean sound, each model in the range is offered with integral RGB LED lighting to add a colourful helping of grist to the mood music mill.

For those more inclined to Radio 3 than Radio 1, non-illuminated versions of the speakers are available too.

The Google Maps of boating

This allows the system to automatically update charts and synchronise routes across devices without using SD-cards or other data transfer solutions.

Orca Co-pilot is also cloud-powered, which means it processes engine, battery and other boat information in the cloud to give boaters automatic trip logs and insights into such things as fuel consumption and abnormal engine behaviour.

Raymarine has long pushed the boundaries of boating gadgets, and its ClearCruise AR system marks another major step along the way on the firm’s never-ending advanced marine systems journey.

In fact, ClearCruise AR (the ‘AR’ stands for Augmented Reality) is an industry-first which has been developed for Raymarine’s Axiom multi-function displays to help skippers make smarter and quicker navigation decisions.

AR manifests itself in practice by blending high definition video from networked marine cameras with on-screen graphics to display and identify nearby AIS traffic, navigation aids and waypoints.

Going Into Lay-up: Preparing Your Vessel for Winter Storage
December 5, 2022