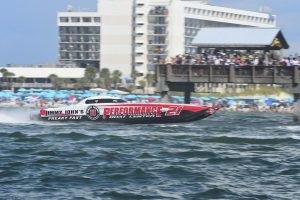 Check out a portion of the article, below, showcasing a recap of the 2016 Super Boat Key West World Championship, as published on page 66 in the latest edition of Speed on the Water Digital Magazine.

Real offshore racing fans are masochists. They follow a sport that, more often than not, fails to live up to its promise. And at the end of each year, they trek from cities and towns across the country to the unruly hamlet of Key West, Fla. They come in the hope that, at least for a moment or so during the three races of the Super Boat International Offshore World Championships, the obscure motorsport will deliver on its potential for spectacular action. They travel to the literal end of the road and spend silly amounts of money for a week to be among those who share their obsession with a sport that can be fantastic, but is mostly frustrating.

If that’s not masochism, what is?

And yet this year, the SBI Offshore World Championships rewarded its loyal followers, thanks in large part to the 10-boat Superboat class and— in particular—the Performance Boat Center/Jimmy John’s Freaky Fast, STIHL and WHM Motorsports teams.

With throttleman John Tomlinson and driver Myrick Coil sharing the cockpit of a new-for-the-season Skater Powerboats 388 catamaran with Sterling Performance engines, the Performance Boat Center-backed team dominated much of the five-race regular reason. The team capped it off by taking home a national championship in Clearwater, Fla., and came into Key West as the favorite to take the title.

But in the three-race mini-season of the Key West event, anything can happen—and usually does. After finishing first on Wednesday, Tomlinson and Coil got a miserable start on Friday and finished fourth. They went into Sunday’s contest trailing defending Superboat-class world champion WHM by 43 points.

“On Friday we had a position we wanted to take on the start but we were dead last out of the milling area,” Tomlinson said a couple of hours before Sunday’s race. “Instead of just going to where there was a hole, we tried to go to that position and it just wasn’t there. Today, we’ll take what’s in front of us.”

And that’s exactly what they did that afternoon by finishing first and claiming the world title.

This article originally posted on Speedonthewater.com.