Our very own Johnny Tomlinson is Throttleman for the Performance Boat Center/Jimmy John’s team, who raced valiantly at the 10th annual performance boat race at Cocoa Beach on Sunday. We congratulate the team for coming in third place in their brand new MTI and are very excited for the rest of the 2019 season. 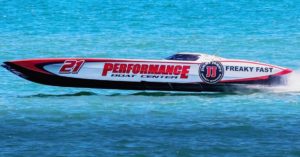 Thousands of people turned up at Minutemen Causeway, Lori Wilson Park and the Westgate Cocoa Beach Pier over the weekend as the Thunder on Cocoa Beach Offshore Race returned for its 10th year on Florida’s Space Coast. Billed as One of the largest in Central Florida, the race draws the top race teams in the world to compete in various classes with the premier class reaching speeds over 175 mph.

Thunder On Cocoa Beach is the loudest, fastest boat race in Florida, and this year’s race featured more world class race teams than even before. The race is celebrated by four days and nights of race action including race parties, concerts, after parties, and chances to see the awesome race boats up close and to meet the teams that make it happen.

The New Zealand team Pro Floors took the lead out of the gate and stayed out in front for the entire race, although MCON was often chasing them by only a boat length or two, at times taking on their competitors’ punishing rooster tail spray in the turns. Meanwhile, Myrick Coil and Johnny Tomlinson in Performance Boat Center/Jimmy John’s tried valiantly to gain ground after having relatively little time to test their brand-new MTI. Though MCON made excellent gains in the corners, Pro Floors continually shot ahead in the straightaways. Pro Floors took the unofficial win, followed by MCON, Performance Boat Center/Jimmy John’s and WHM Motorsports.

Class One racing capped the Thunder in Cocoa Beach action as the OPA/P1 competition pitted the big offshore boats against each other. Nearly all of these boats were powered by identical 1,100 QC4 turbocharged engines from Mercury Racing.