More and more boat owners are recognizing a need for more power, which is why we’re excited about the new Mercury Marine 400 Verado outboard, boosting power, efficiency, and of course, speed. Read more about the lightest engine in the monster class below, and be sure to call or stop by TNT Custom Marine to ask our knowledgeable staff members more about this fantastic new engine. 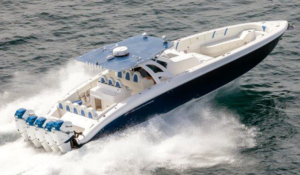 Outboard engines continue to take over the world in terms of recreational power preference, and the demand for bigger and bolder outboards has grown exponentially. The idea of twin 300 hp outboards on the transom seems quaint in a world when so many new boat models come armed with quad­ruple 350s. It is in this new reality that Mercury ­Marine saw the need to introduce its 400 Verado outboard.

“As boats continue to increase in size, so has the need for more power,” said Mercury’s president John Pfeifer at the 400 Verado’s official unveiling at the Miami International Boat Show last February.

The 400 Verado is based on the 350 Verado, which debuted four years ago. It features the proven 2.6L inline-six powerhead with a dual overhead cam and 24 valves. It also has a supercharger to boost power and efficiency. Paired with a 5.44-inch 1.75 HD gear case (meaning it has a gear ratio of ­1.75-to-1), the 400 Verado is designed for a max rpm of between 6,200 and 6,800, depending on installation and prop selection.

The engine is expected to fill the gap in Mercury’s lineup between the existing 350 and the Mercury Racing 400R, which is designed more for speed and performance — you know, ­racing — than for offshore recreational use.

While there are several ­engineering differences between the new 400 Verado and its 400 Racing sibling, one of the most noticeable proved to be the smoothness and quietness of operation. We tested the 400 Verado and several boat models at Mercury’s storied Lake X and recorded decibel sound levels in the low 60s at idle speeds. On an Axopar 37 T-top with a twin 400 Verado installation (see Boat Doc Special on page 50), we recorded a sound level of just 62 db at 1,000 rpm. At 3,500 rpm and around 27 mph, our decibel recording still measured in at just 80 — and a big part of that was from wind noise.