TNT Custom Marine has recently taken on two major custom boat rebuilds. One is a 50-foot Cigarette Marauder. Last week we shared a post regarding the rebuild of the Apache boat, owned by long-time friend of John Tomlinson, Lorne Liebel. Read below for more on this major boat rebuild.

“Unless it’s a complete start-over or close to it, we don’t even entertain it,” said Tomlinson. “If someone comes in with a half-finished restoration or re-rig he wants us to ‘just finish up,’ we won’t touch it. That never works. We always ended up getting nickel-and-dimed on those jobs so we don’t take them.

“Older-boat jobs are hard to bid because you never know what you’re going to find,” he continued. “So we get really picky about which restoration projects we are going to do.”

As it happens, Tomlinson and company have two such projects currently in the shop, one which is a 50-foot Cigarette Marauder with Mercury Racing 1350 engines—one of the first to be equipped with the Fond du Lac, Wis.., company’s turbocharged quad-cam four-valve engines.

“Mercury Racing is refreshing the engines for the Cigarette,” said Tomlinson. “Since we won’t have the boat’s new interior from Fineline back for a while, I told them there was no rush. We should have the engines back in two months. It just got back from being painted by David Hunter about a month ago.

“The customer bought the boat in Europe and brought it back about a year ago,” he continued. “It was a wreck. One of the engines was locked up, the other was OK. We are rebuilding the drives and replacing the gimbals, repainting the bilge, and replacing a lot of the old rigging. We’re also replacing the Garmin GPS units with new models and installing all-new Livorsi gauges.”

Tomlinson said that the project should be finished in one to three months, depending on when the new interior is complete.

Click here to read the complete article from Speed on the Water! 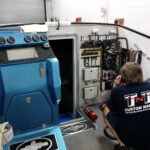 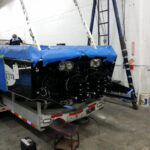 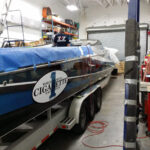