Controlling Your Boat in a Current 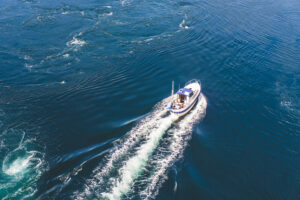 Controlling your boat in a current can be a daunting and dangerous task. With that in mind, we have provided you with a  guide on how to control your craft in challenging current-filled waters. From docking to crossing, by the end of this article, you will know with confidence how to approach your next boating adventure safely. Here at TNT Custom Marine, we want all of our patrons to become the best helmsman possible. Continue reading below to learn more!

Whether you’re docking your boat, in a crossing or passing situation, or you’re at the boat ramp, if the waters you’re in have a current, the job before you can seem challenging. Currents can knock you askew, hit the hull when you least expect it, and turn a maneuver par excellence into an unmitigated disaster. If that is, you aren’t aware of how to handle the current — or better yet, how to use it to your advantage.

Currents can have a wide range of effects on virtually any and every aspect of boat handling. And these effects can differ depending on your type of boat. A deep-keeled sailboat, for example, will experience very different current-induced influences compared to a flat-bottom jon boat. It’s impossible to catalog each and every potential event, but we can at least take an in-depth look at some of the most common current events, how the average boater can handle them, and learn from the examples.

Important Note: No matter what situation you may be dealing with, there’s one overriding fact you must always be aware of when you’re in a current: You have more control heading into it than you do when it’s pushing against your transom. Heading into the current, the water is flowing faster across your rudder or outdrive, so steering maneuvers have a greater effect. At the same time, having a current against the hull’s forward motion acts as a brake to slow you down. It’s not very different from why airplanes always land and take off going into the wind.

Docking Dilemmas
When you’re trying to dock in a current, in all likelihood you’ll either be entering a slip with a cross-current or pulling alongside a pier with the current running along with it. These two situations require different approaches but a similar frame of mind. In both cases, planning ahead is key. Before even approaching the dock or slip, shift into neutral, allow your boat to drift in the current for a few moments, and try to get a feel for how it will affect the boat long before you actually approach the pilings and planks.

In the case of entering a slip with a cross-current, don’t try to fight a battle against the moving water because you’ll lose. Instead, line up the boat for entry well up-current from the slip, and allow the current to do the work of moving the boat sideways and in line with the opening while you regulate forward and aft movement. Remember that getting the transom between the pilings is what really counts; once the aft end of the boat is in the slip the current may still try to shove your bow out of kilter, but if need be you can allow the side of the boat to kiss the down-current piling and apply (gentle!) reverse power to port or starboard, as appropriate, to pivot against it and regain alignment.

Note that whenever you’re approaching a slip subject to current, look at the pilings to make sure there aren’t any lines drooping into the water. If mooring lines aren’t hung up properly and are sitting in the water, current can stretch them across the slip where they can foul your prop(s).

When approaching a dock on the beam, the current can actually be a tremendous help. If that is, you remember the earlier recommendation to operate your boat into it rather than with it. Simply pull parallel to the dock, and match the current’s speed so you’re making no headway. Then you can turn the wheel ever so slightly to port or starboard as appropriate, and glide in toward the dock. Recenter the wheel to stop your sideways travel and reapply it to slide in closer, and you can move your boat right up next to the pilings slowly and safely. As you do so, if need be, you can apply a bit more or less power to move up or slide back along the pier and place your boat in the perfect spot.

Crossing And Passing
In most cases, planing powerboats that are cruising won’t feel too much effect from the current as they maneuver. In slow-speed zones, however, all boaters need to take account of the current before they try crossing or passing another boat. Remember that if you’re crossing in front of someone’s bow while traveling with the current on your opposite beam, you’ll be pushed back toward them, perhaps as fast as that current’s running. The same goes if you’re heading into the current and plan to make a 90-degree turn that could bring you into the path of another boat. Having a current on the beam can quickly shrink what seems like plenty of room.

Also keep in mind that other boats may be affected differently than your own, and as a result, predicting their travel in a current can be difficult. A sailboat traveling with a current on the beam, for example, may move sideways much more significantly over a particular distance than your planning powerboat. And a boat with limited speed may seem to be moving into a current achingly slowly to you, even though it’s running full-tilt. That may tempt you to pass it, but again, remember that if the boat you’re passing makes a turn, distances that appear sufficient can melt away rapidly with a strong current. Just as you need to plan for extended braking distance when driving a car on a wet road, you need to extend safe distances both crossing and passing in a current.

Launching And Loading
When you’re at the launch ramp, launching and loading a boat with a cross-current is similar to pulling into or out of a slip, except that in some cases it’s even tougher because there aren’t any pilings to pivot on. Launching usually doesn’t present too much of an issue, just as long as you realize there’s a current and you’re prepared to counter-steer against it the moment the boat comes off the trailer. But loading is a different story. Even if you get the bow of the boat onto the trailer, the stern can still get knocked askew. If there’s a dock you can back the trailer down next to or if the water’s shallow and warm enough to wade in a bit and perform the loading procedure manually, this is commonly a smart move.

If you need to power onto a trailer, the most critical issue is making sure that you maintain control rather than ceding it to the current. That means the judicious use of power is necessary. Short bursts of throttle with the engine or drive already turned and in position, strong enough to overcome the effect of the current, have to be applied. Just as critical is recognizing when the jig is up — if the boat isn’t on a trajectory you feel you can keep a handle on, abort the maneuver. Pull away from the trailer, circle around, and try again.

Once you successfully position yourself up-current, motor forward, and get the bow between the bunks, remember that while the bow will stop going sideways, that isn’t necessarily true of the stern. Be prepared to cut the wheel hard-over, and/or give a (careful) bit of extra throttle to move the boat up onto the trailer most or all of the way.

Keeping all of these things in mind, will you still find maneuvering in a current challenging? Of course — and that’s without even talking about the effect of a strong breeze. And while it’s easy to talk about maneuvers, it’s often much more difficult to do them. Learn to treat the current to your advantage, and you’ll soon be backing into that slip, crossing that channel, and loading up that trailer with confidence.