John Travolta and Johnny Tomlinson of TNT Out For A Ride 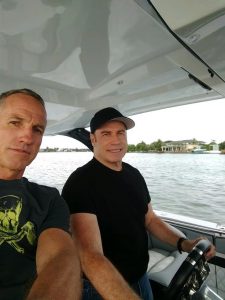 Johnny Tomlinson from TNT Custom Marine takes John Travolta out in a MTI center console for a run on Key Biscayne. Travolta is playing the starring role in the upcoming movie Speed Kills, which highlights the death of famed racing champion Don Aronow. Tomlinson has a history with Aronow, as both Aronow’s Cigarette Racing and Tomlinson’s TNT custom rigging we’re on the famous and infamous 188th St. Thunderboat Row. Johnny has appeared and worked on many movie sets that have marine and water elements, like Miami Vice featuring Jamie Foxx and Colin Farrell.

Johnny said, “It was great to go around with John around the waters of Miami, he is a fantastic and really smart guy. He was a very humble person that really extended himself to others around the marina and he was just very nice.”

Aronow was infamous for building go fast boats and was the owner of Cigarette Racing. He was gunned down in front of his office on 188 street. Magnum Marine is now the only remaining boat manufacture on 188 street. There’s got to be some of that in the upcoming movie Speed Kills. Johnny said “He had a great day with Travolta with hopes of seeing him again.”

Johnny said “He had a great day with Travolta with hopes of seeing him again.”