As expected, Florida’s Gary Ballough is overjoyed with his new all-carbon-fiber 32-foot outboard-engine-powered catamaran built by the Dubai-based Victory team as well as the efficient rigging job handled by TNT Custom Marine in North Miami. 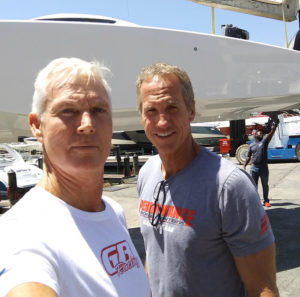 Earlier today, the world champion offshore racer teamed up with TNT Custom Marine’s John Tomlinson—a world champion several times over, at right—to splash the all-white 32-footer for the first time and give it a little shakedown cruise before the testing process begins with the first race a little more than a month away.

“JT and I ran it today and I have to say it was better than I expected—the thing is awesome,” said Ballough, who is going to race the new boat under the FJ Propeller umbrella alongside driver Jimmie Harrison (the owner of Frank & Jimmie’s Propeller) in the Super Stock class of the OPA/P1-sanctioned American Power Boat Association Offshore Championship series. “Out of the box, it feels great. Now we get to test, which is always fun when you have a new boat. The guys back in Dubai are excited the boat is done. They’ve been so supportive and such an incredible resource.”

Utilizing the Mercury Racing 300XS engines from his pleasure boat—a 32-foot Doug Wright catamaran—Ballough said the team at TNT Custom Marine, which has rigged a dozen raceboats for him, were incredible to work with once again.