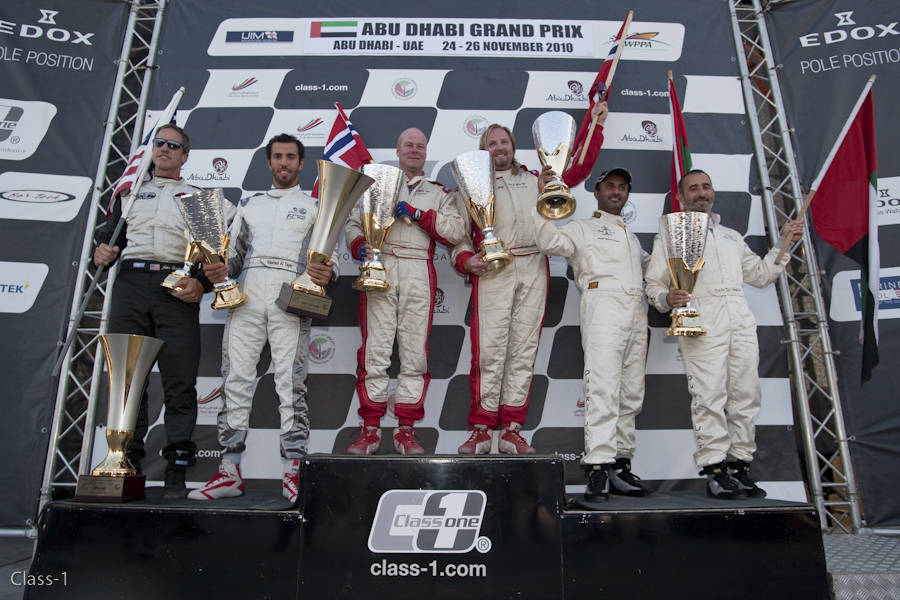 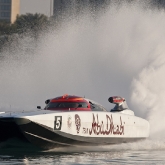 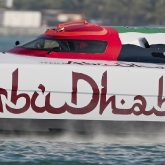 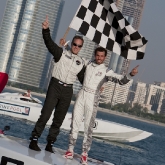 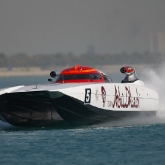 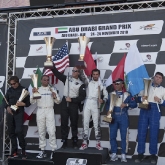 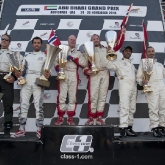 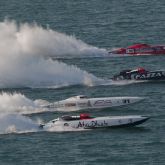 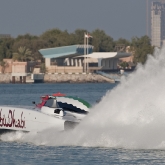 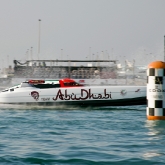 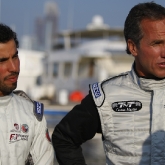 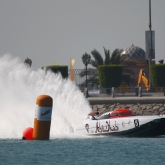 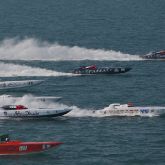 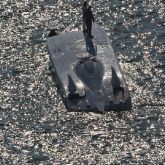 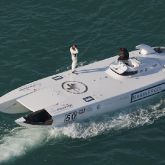 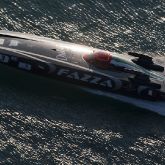 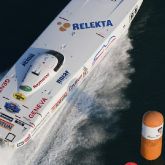 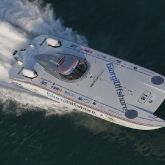 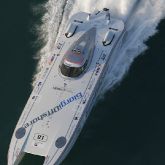 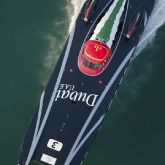 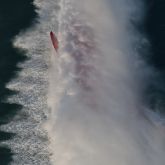 Second place went to Welmax’s Kolbjorn Selmer and Jorn Tandberg after a titanic battle for podium honours with their Norwegian rivals Relekta, with Paul Gaiser and Christian Zaborowski producing an outstanding performance to take their first podium of the year.

The drama unfolded at the first corner when race leader’s Mohammed Al Marri and Giorgio Manuzzi spun-out and then rolled Victory 2010, with both pilots emerging unscathed from the upturned hull. “We hit a wave just as we made the turn but everything seemed to be OK then we suddenly hooked and went over.” said double World Champion Mohammed Al Marri.”

The high-impact coming together between Abdullah Al Meharibi and Talib Al Sayed in Skydive Dubai and Italians Luca Fendi and Giovanii Carpitella in Negotiator, that sidelined both boats, happened almost immediately. “We arrive together at the turn with number 7, I saw number 1 coming from outside, we turn easy then I saw the nose of 1 coming at us.” said Carpitella.

From the restart the World Champions were in a class of their own, emerging from the outside start-leg with Fazza out front and comfortably clear of the chasing pack, with Al Zafeen and Bin Hendi going on to take their 19th career wins, completing the shortened 12-lap race in 30mins 26.42secs. “We came here looking for the title and that’s what we got. Now we can take it easy in Dubai,” said Bin Hendi. “Arif did a fantastic job, both of us worked hard for this and the team deserve it. They have worked hard all season.”

Behind the race leader’s a titanic three-way race-long fight for the remaining two podium places was played out with just seconds separating Relekta, Team Abu Dhabi and Welmax, with Welmax coming through to take second place from Relekta on the penultimate-lap. “A great result but not our best effort and we made hard work of it,” said Selmer. “We didn’t make a good start and we weren’t really focused. But we eventually got it together, had a great fight with Relekta and Team Abu Dhabi and came through to take second spot.”

Relekta’s first podium of the season was the result of an outstanding drive by Paul Gaiser and Christian Zaborowski who heroically held off their challengers for ten laps before finally conceding second spot. “This was easily our best drive together and we have shown what we can do and how good the boat is,” said Zaborowski. “We put ourselves in a good position after the start and by some smart driving we were able to keep the others behind us for almost all the race.”

For race 1 winner’s, Team Abu Dhabi, it was a case of the podium that got away from them after Rahed Al Tayer and John Tomlinson were given a penalty long-lap for missing a turn buoy at the end of lap six, dropping them to fourth place, with GiorgiOffshore’s Sandro Sardelli and Nicola Giorgi completing a solid points scoring weekend finishing fifth, whilst an already frustrating weekend for Guido Cappellini and Giampaolo Montavoci in GSG Ceramic Design ended with them stopping just minutes after the restart.

With their third World titles already secured Arif Al Zafeen and Nadir Bin Hendi will now turn their attentions to trying to overhaul Team Abu Dhabi in the battle for the Middle East Championship in the final Grand Prix of the season in Dubai, 9-11 December.

MIDDLE EAST CHAMPIONSHIP – after race 2 of 4