Demand for Power Out Paces Supply 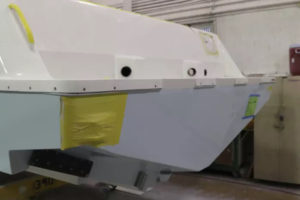 Builders are having trouble getting outboards for new boats and repowers. Photo Credit: Trade Only Today

Some manufacturers are having trouble meeting demand for larger outboards, creating frustration and opportunities

John Tomlinson was in a bind. The co-owner of TNT Custom Marine in North Miami had a delivery date of July 4 for a 42-foot Marine Technology center console powered by quad 350-hp Mercury outboards. The $850,000 boat was ready, and the customer was making the payments.

As of June, TNT still didn’t have the engines. Tomlinson had been waiting for six months, and every time he called for an update, Mercury had pushed back the delivery date. To keep his customer happy, Tomlinson got four Mercury Racing Verado 400R outboards and split the $10,000 upcharge with the buyer to make the Independence Day deadline.

That wasn’t the only way that TNT has felt the supply-chain crunch for big outboards. “We’re always doing repowers,” Tomlinson says. “If I could get engines within two to four weeks, I’d be lining up the repowers. We usually do one per week, but it’s cut that business in half.”

Multiple sources say Mercury and Yamaha are having problems meeting demand for outboards above 200 hp. In an email to Trade Only, Mercury Marine president John Pfeifer says, “Demand for the recently launched V-6 and V-8 engines has exceeded our expectations, and the product has been very well accepted in the marketplace.” He added that demand for Mercury’s high-horsepower outboards is up “well into double digits” and that shifts have been added at the Fond du Lac, Wis., plant to reduce lead times.

Mercury introduced a number of 4-cylinder V-6 and V-8 outboards this year, and there was speculation that the retooling of the assembly and production processes was partly to blame for the company’s inability to keep up with demand. Pfeifer says Mercury hasn’t lost business or market share, adding, “We realize customers are experiencing longer than normal lead times, and we understand and appreciate the patience our customers have shown for this new product.”

Mark Schwabero, chairman of Brunswick Corp., said in a second-quarter earnings call that Mercury production “will reach full run rates by the middle of the third quarter.” He added later that demand will outpace production into 2019. “We are aggressively working on plans to further increase capacity,” he said.

Mercury’s primary competitor, Yamaha, has had an equally challenging 2018. “Yamaha has been going on for about a year,” Wylie Nagler, president of Yellowfin, says about big-engine delays. “We didn’t feel it as much because…

CLICK HERE TO CONTINUE READING
This article was originally posted on tradeonlytoday.com.