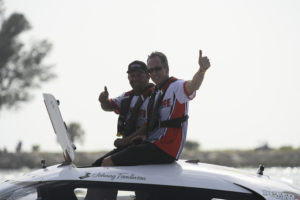 Take your adrenaline threshold to the edge as Super Boat International (SBI) descends upon the Southernmost City in the U.S. with fast and furious racing when the 38th annual Key West World Championship takes the green flag November 4-11.

If you mention the words Key West around the high performance crowd, you’re bound to get a superlative round of responses that describe the legendary site. “Key West is the world’s only city that breathes offshore powerboat racing for a week,” former Super Vee champion Michel Karsenti explained. Current Superboat World Champion John Tomlinson of Performance Boat Center/Jimmy John’s provided an unequivocal description of the site that continues to entice racers from around the globe. “Key West always has the hype.”

Most racers agree that Key West is one of the premier racing venues on the planet with one of the most challenging, yet thrilling courses in the world. And, the general consensus is that if you haven’t raced there, well then you’ve literally missed the boat.

So, when the calendar flips to November, the eclectic mood that permeates this Florida Keys destination accelerates into a highly fueled liquid speed track for a super-charged race week as  top offshore contenders compete for the ultimate prize all racers covet. As retired and multi-titled Peter Meyer said, “It’s the bragging point of offshore. I won Key West – I won the Worlds!”

CLICK HERE TO CONTINUE READING
This article was originally posted on OffshorOnly.com.